A Chip off the Old Bean

Benjamin Atkinson is the son of the beloved comedian Rowan Atkinson and his ex-wife, Sunetra Sastry. He was born on 9 September 1993 in the UK, but unlike his father, Benjamin chose not to go into show business. Instead, he decided to serve his country and recently joined the Royal Gurkha Rifles as an Officer.

According to The Gurkha Brigade Association, the son of Mr. Bean took to the Nepali studies pretty quick, and the reason given for it was pretty sly. “Lt. Atkinson grasped the language remarkably quickly. This may be attributed either to his language experience, having studied both Arabic and Spanish previously," they wrote. “or to his urgent requirement to learn the local Nepalese ‘chat-up’ lines. Learning some Nepalese dance moves was also a personal priority, and Lt.
Atkinson was quick to establish an impressive “uthyo basyo” (an up-down rapid squatting dance-move).”

After three months of language and cultural training, the soldier was one of the Gurkhas and took his place in the role of a Gurkha officer. 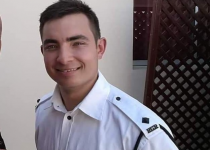 And of course his father must have explain British soldiering to him.

You must log in or register to reply here.

How Ottawa abandoned our only Arctic port